I’m still a little in awe of the fact that I’m about to be on television. We started this process almost a year ago and now the episode is about to air!!

My friend Tiffany of LeBlanc Design was the one to introduce me to this opportunity. She basically didn’t give me any choice in the matter and said, “Kate,  you’re doing this. I did it and now you’re going to do it too.” Love you Tiff!

Step one was an on screen interview with Pietown Productions…they are the folks that actually produce the show for HGTV. Once I passed that stage I was assigned my clients. Kate and Tom Hurley are a young local couple that recently purchased a Victorian home and the kitchen needed a complete overhaul. Enter “Designer Kate” to help them maximize the space and create a warm and welcoming kitchen for their growing family.

I presented my design schemes to Pietown and then to HGTV directly via Skype. They asked me for a floor plan, design concept board and budget. Here is my round one concept board… 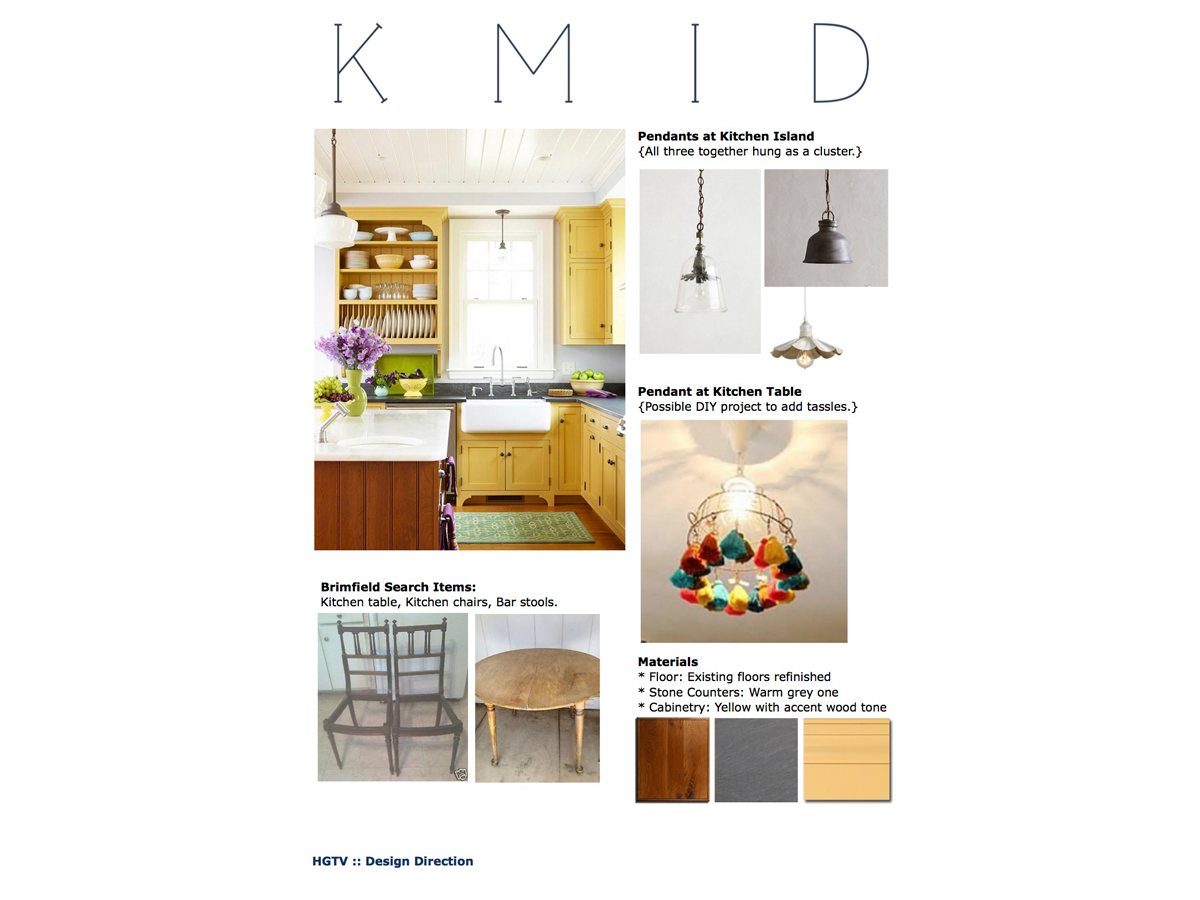 While they were thrilled that I wasn’t presenting a white kitchen, they also thought the yellow was a little over the top. They asked me to speak more to the “GRAND” style request from Tom and the “COMFY COZY” style request from Kate. So I tweaked the cabinet color and lighting selects and had a winning scheme!! 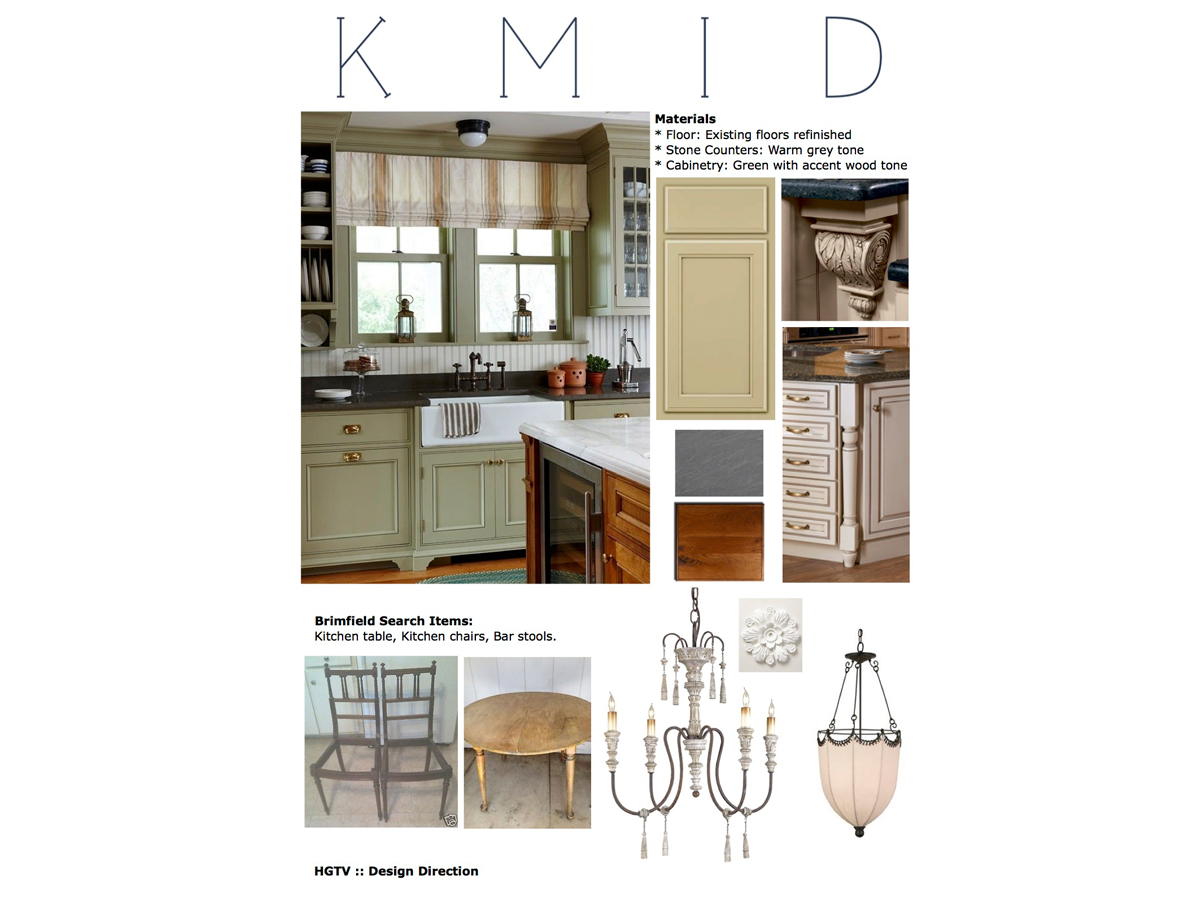 With an approved design scheme and a timeline it was now time to build my team. I turned to my good friend and general contractor Dan McCarthy of McCarthy Enterprises to help me with this exciting opportunity. {We had also just hired Dan for the Prescott Project so we saw a lot of each other in 2014…and we’re still friends so that’s AWESOME!}

I was SO thankful to have a friendly face in Dan on day 1. Neither of us had any idea what was about to happen so it was fun to have someone to share it with. Selfie on our first day of shooting. Let the games begin! 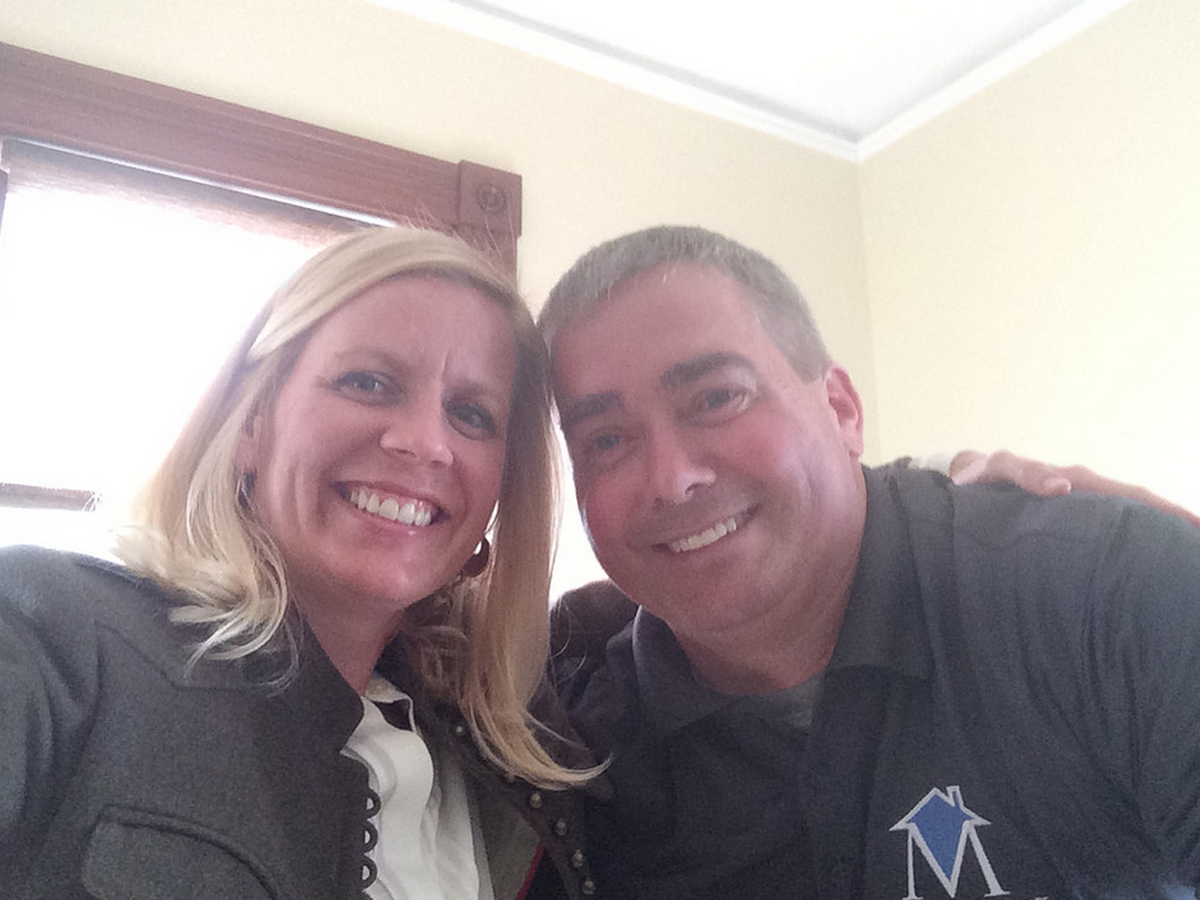 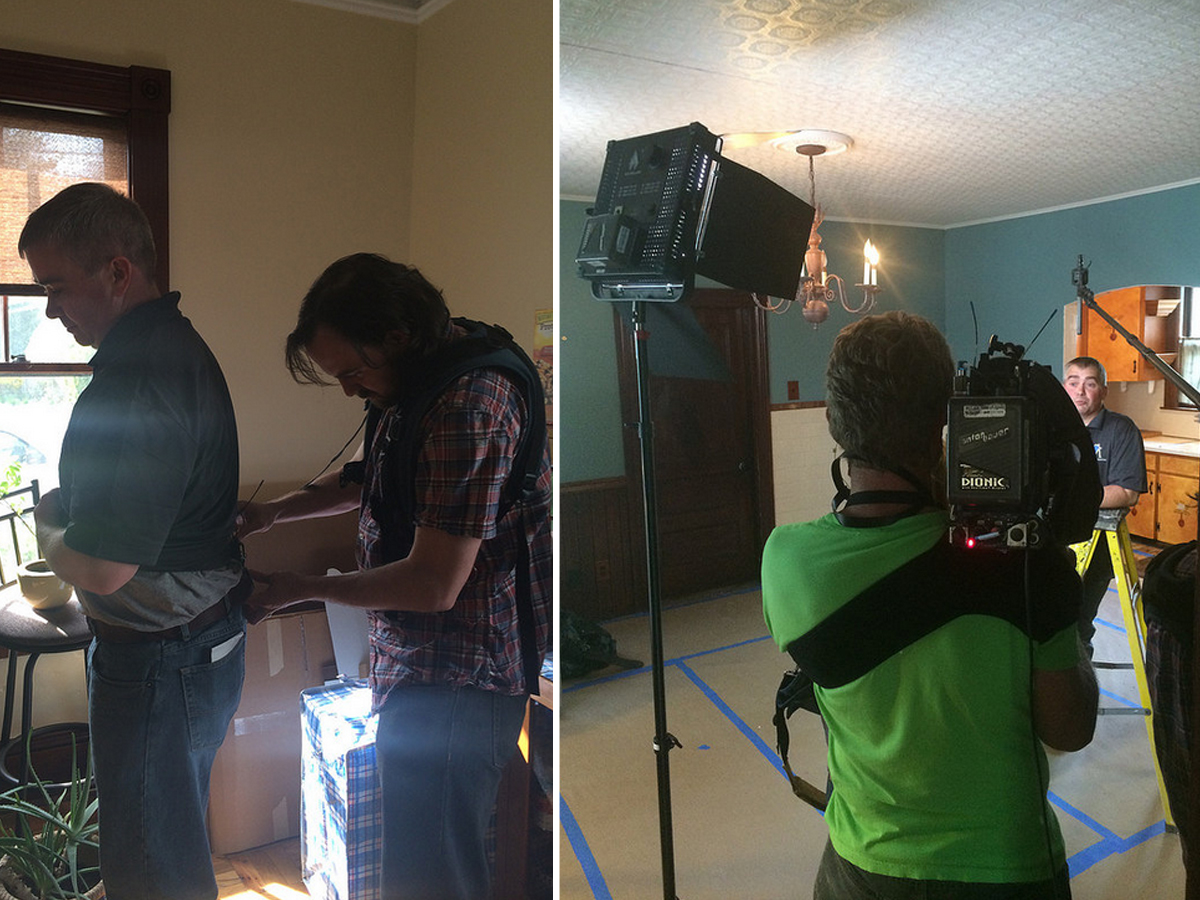 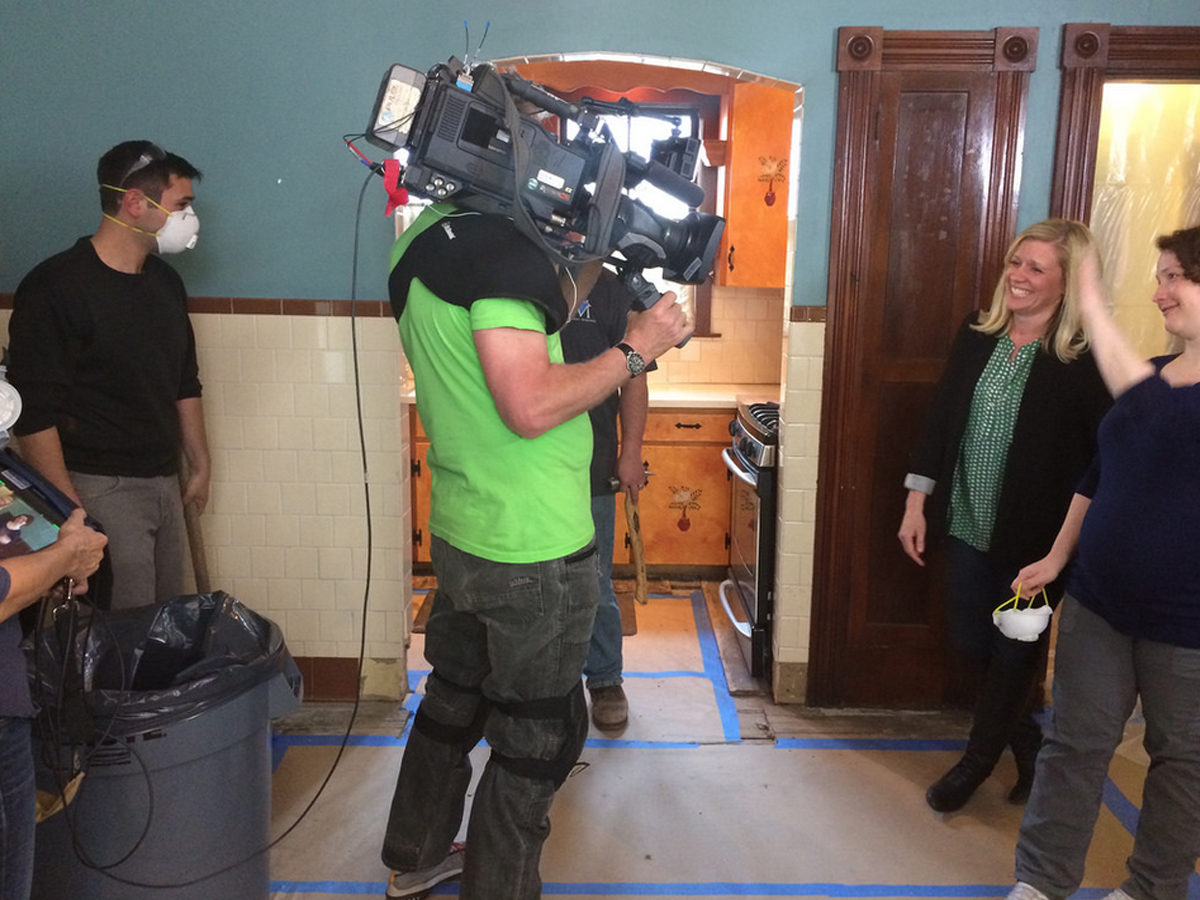 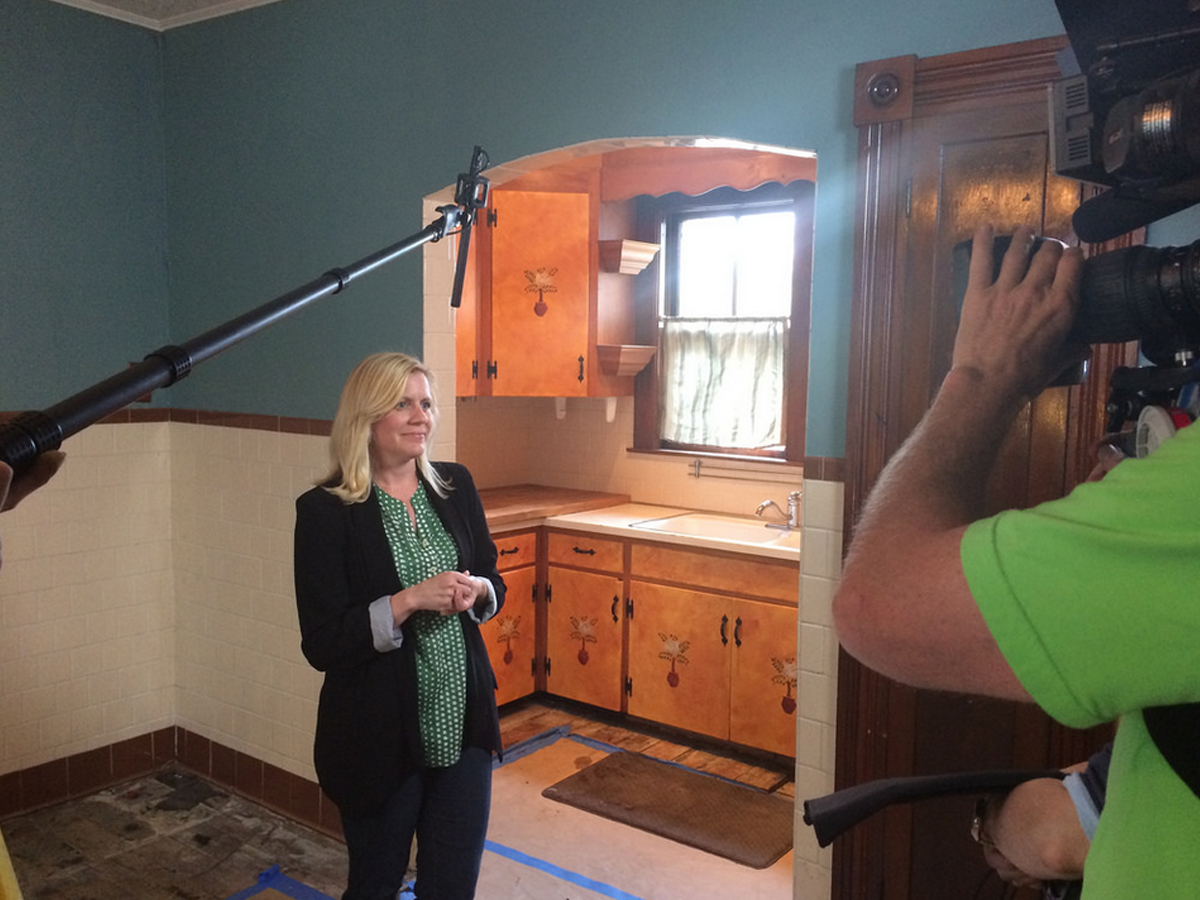 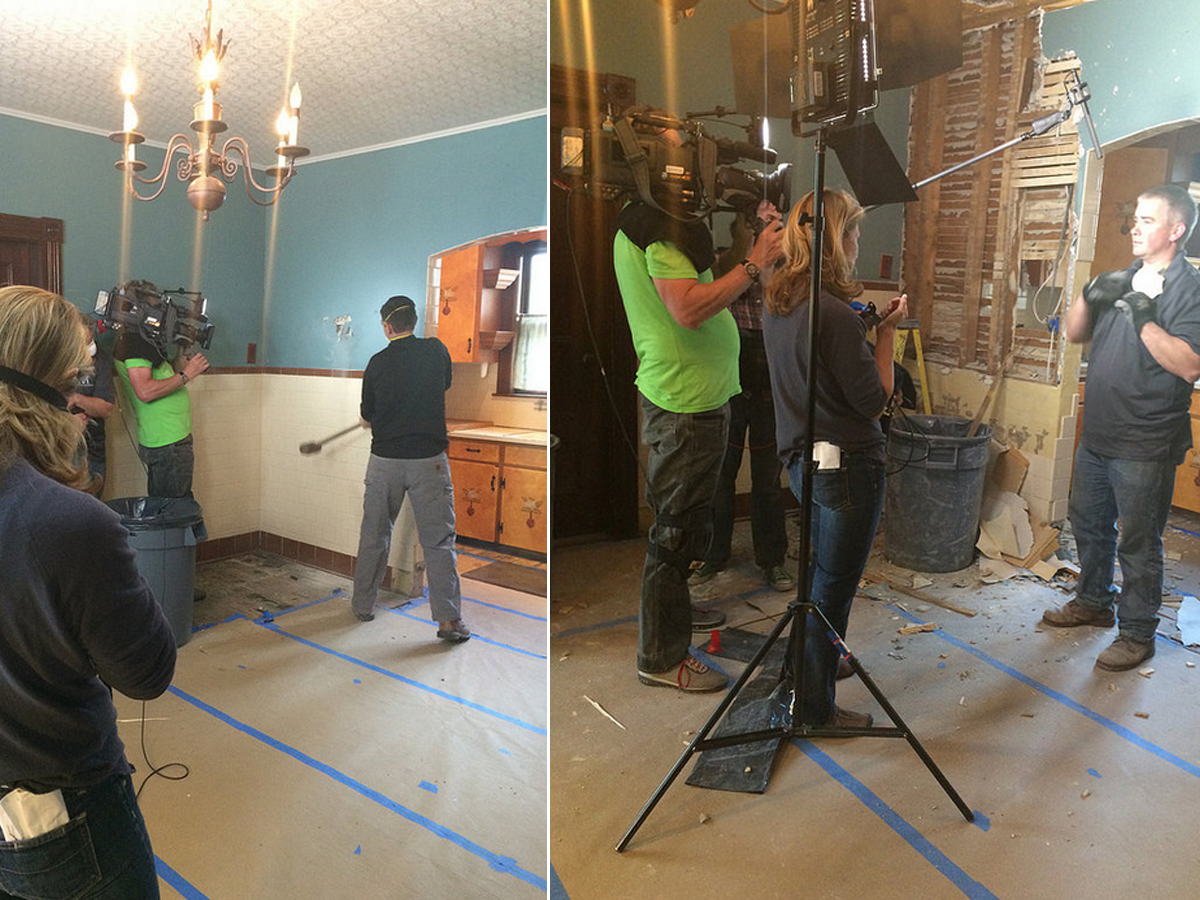 HGTV asked me to come up with a “field trip” idea for the show. Then they said, “Have you ever heard of Brimfield? Maybe we can shoot there?” Well clearly this is all meant to be. It was pretty fun walking the fields with a camera crew. Certainly different then my typical entourage… 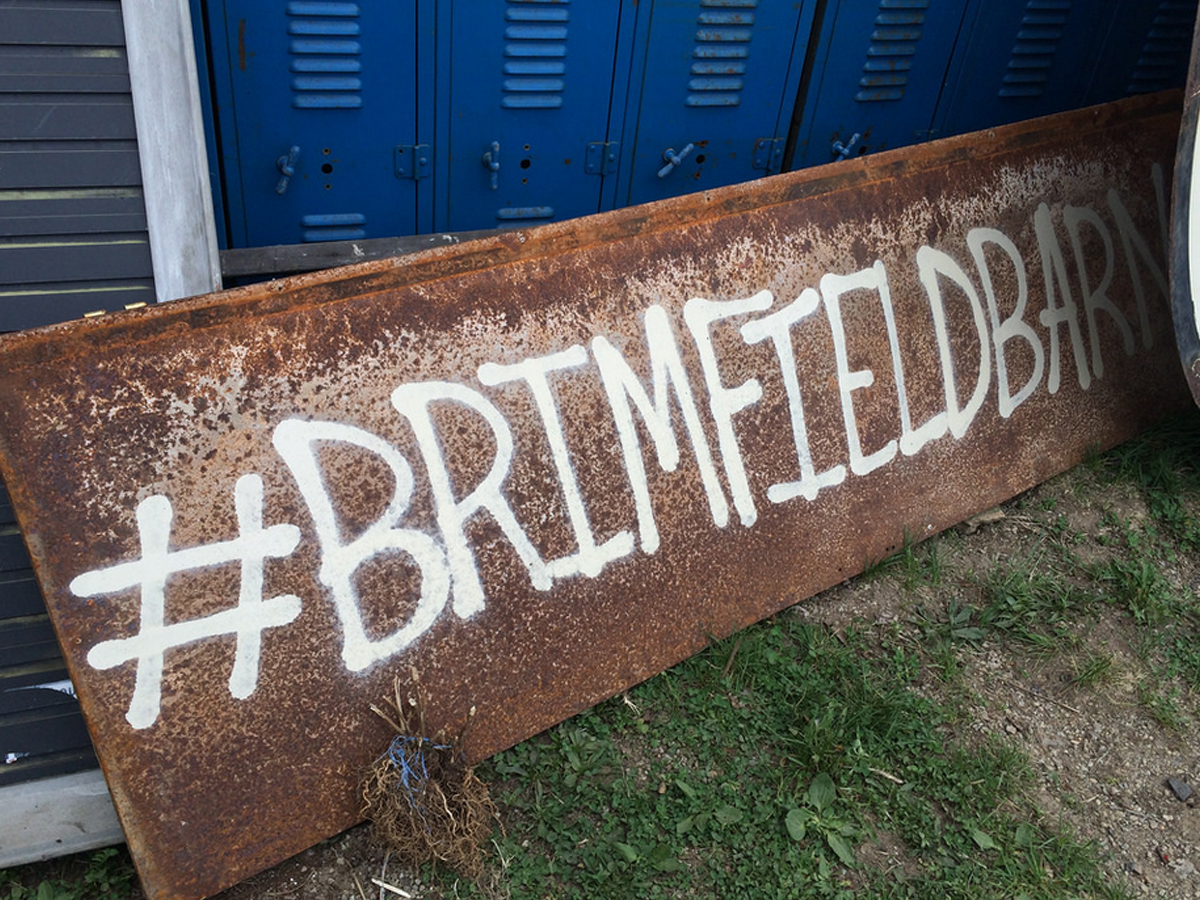 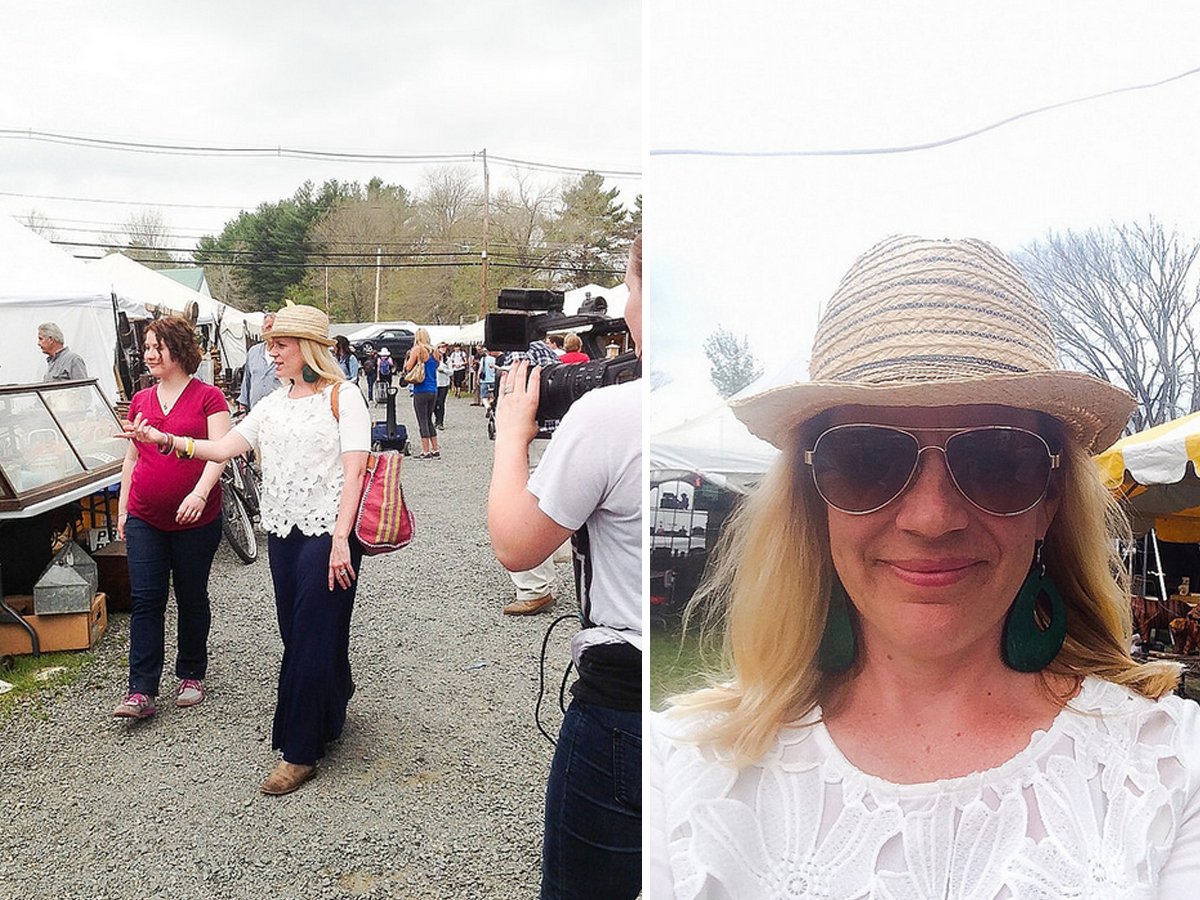 Our Moms were fast friends which made the day just that much more fun! Plus our film crew is awesome and made us all feel comfortable from start to finish… 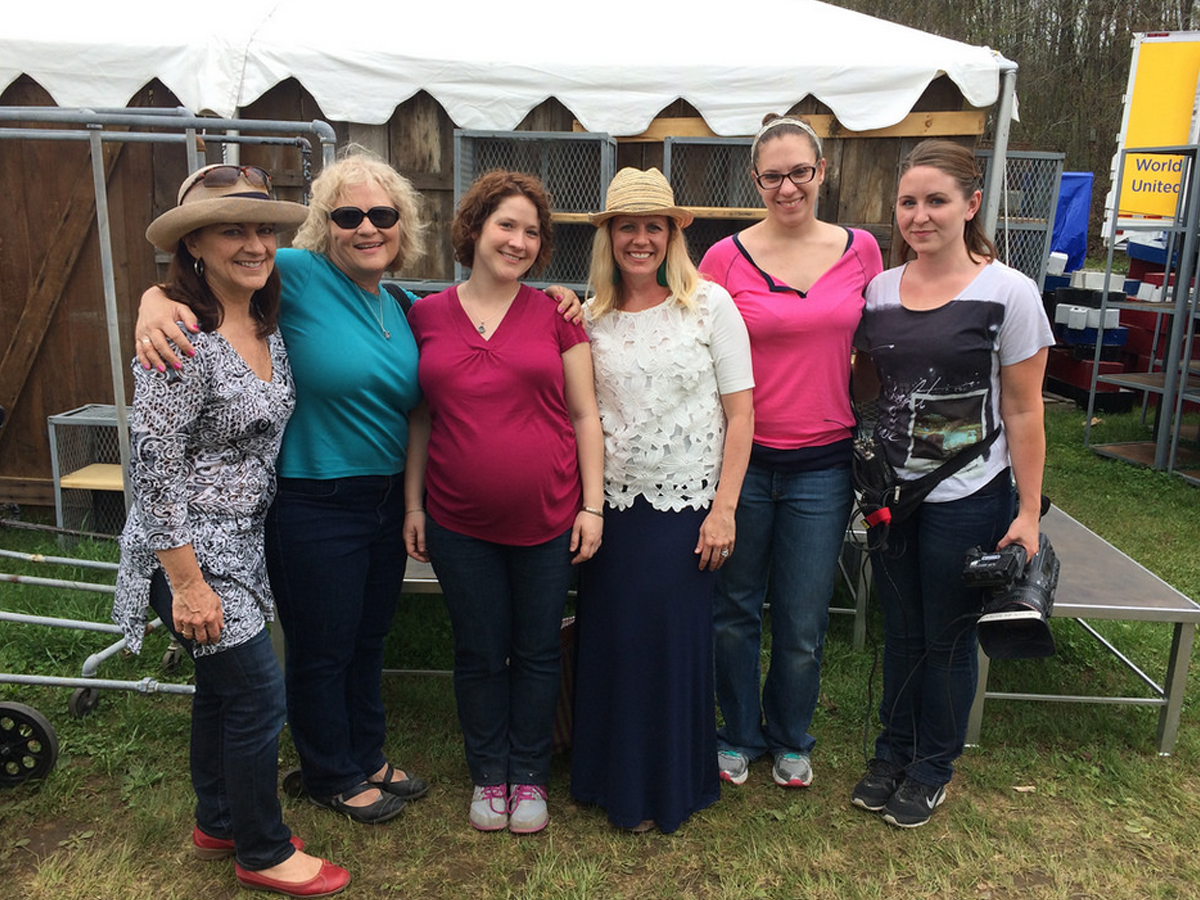 There were a few days of work in between filming days {to say the least} but this is TV and all you really want to see is the BIG REVEAL!! 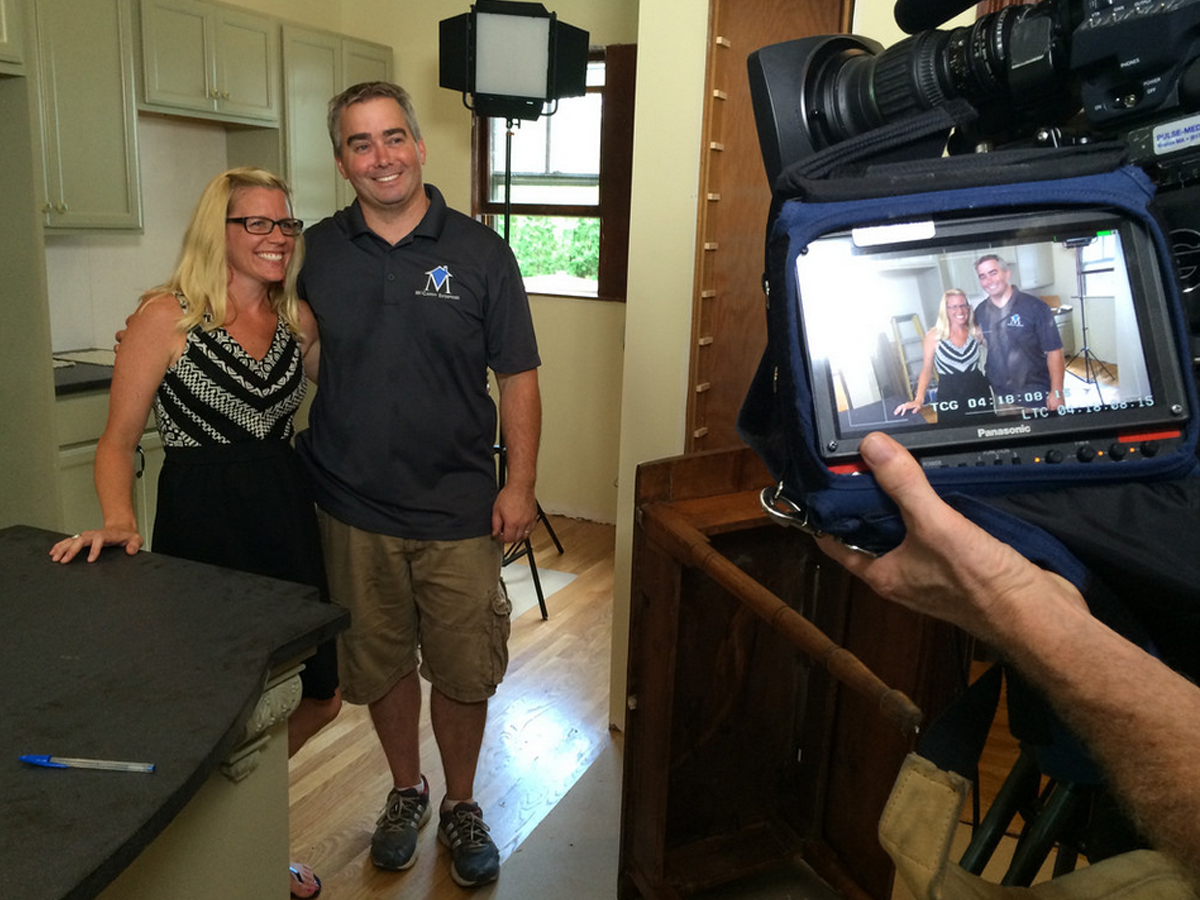 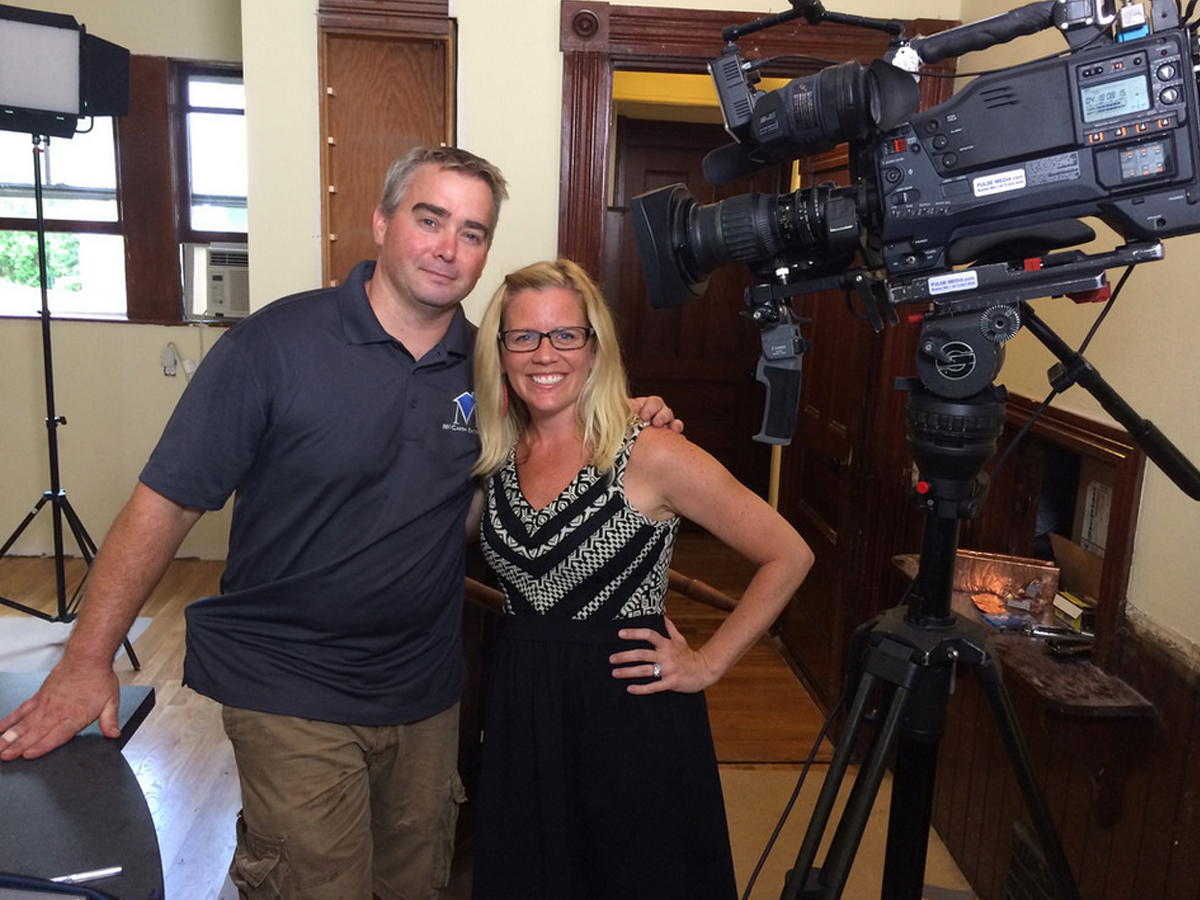 Stay tuned for our episode to air

I’ll also be sharing before and after photos on the blog after it airs. Stay tuned!